Over the last year or so I’ve noticed some language change happening to the word ‘provide’ and how it’s used with prepositions – the words that tell you the relationship between the nouns (and pronouns).

A verb like ‘provide’ can be transitive, intransitive or ditransitive. That is, it can work:

The third example has the preposition ‘with’ or ‘to’, depending on what order you put the nouns in, but the rule is that the noun that comes second uses a dependent preposition, and if the recipient is the indirect object, then this element is optional.

‘Provide’ has a few dependent prepositions:

What I’ve been seeing recently is examples where the author clearly meant to use the ditransitive version, but didn’t add the preposition:

They provided her food.

The original sentence, ‘They provided her with food’ means that someone has given a woman some food.

If we take the preposition out, ‘her’ is acting possessively to modify ‘food’. It was her food, not his. Or: ‘The food that is her was provided by them.’ The focus can vary, but what’s important here is that the food is hers.

The restaurant also ensures that students provide customers service that reflects the excellent reputation the owners have built up over many years.

This sounds like it was supposed to say either ‘customer service’ or it’s a possessive that is missing its apostrophe. Was it meant to be ‘customers’ service’? If we put the preposition in, it’s clearer:

The restaurant also ensures that students provide customers with service that reflects the excellent reputation the owners have built up over many years.

The reason I’m uncomfortable with the form that omits the preposition is a question of geography. It’s not acceptable in British or Australian English, but it is acceptable, apparently, in American English. Forms such as ‘provide me food’ are found in the US, which to my Australian ears just sounds like someone being lazy in saying ‘my’.

Here are some ngrams for the phrase ‘provide me (with) food’ according to English, American English and British English. It’s clear that the phrase using the preposition is much more common than without. But interestingly, the two forms are closer together in British English than in American English. Ngrams are only looking at published works, most of which will have been through some kind of editorial process and therefore will conform more closely to standard. 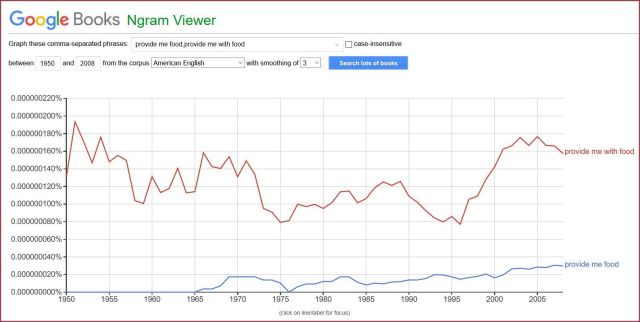 It will be interesting to see how this changes in the coming years, but for now I’m staying with the ‘with’ team.

Do you prefer your books similar to your movies, or different from them? What about different to them? Or even different than them? In Australian usage, ‘different’ is usually paired with ‘from’, at a rate of about 6 to 1 (and ‘similar’ is usually paired with ‘to’), but it’s not the case that one is considered right and the other wrong. Fowler, in 1926, said it was a superstition that ‘different’ could only be followed by ‘from’. (He was rather acerbic in this entry, actually, saying this was a mere pedantry, a hasty and ill-defined generalisation … made by mistaken critics.) The modern edition gives more detail about usage, giving ‘different to’ as occurring from 1526, ‘different from’ occurring from 1590, and ‘different than’ occurring from 1644. The trend has been for ‘different from’ to be more accepted in British usage, and ‘different than’ to be well accepted in American usage. Even though Australians may cringe to hear ‘that red car is different than the blue one’, they will be happy with ‘that result is different than we expected’ where a conjunction, rather than a preposition is required and where ‘than’ neatly replaces the repetition of the noun in ‘that result is different from the result we expected’.

The argument that we should say ‘different from’ because we are bound to say ‘differ from’ is also a furphy as it is not extended to other similarly derived pairs. For example, we must say ‘accords with’, but we accept, indeed require, ‘according to’.

In June, I attended the Society of Editors (Qld) meeting in temporary HQ at Thorn St, where we were students in an editing first aid course delivered by paramedic Karl Craig. The course, ‘the paramedic method’, is based on Richard Lanham’s Revising Prose¸ a book first published in 1979 and now in its fifth edition.

Karl edits PhD theses, a genre in which 20,000 words of information can be crammed into 80,000 words of text, so it was clear that this paramedic editing is a skill he is necessarily practised in. He was introduced to the method when he began editing, around 10 years ago, and he described it as the sort of work most editors do intuitively.

The method is designed, as the book title explicitly says, for revising. It is not designed to help a person extract, syllable by syllable, the gossamer ideas from their heads to become print on the page. Nor is it designed for fiction, which must spend time building worlds for the reader, who must be serenaded into the story.

This method is a ‘direct assault on the “Official Style” ’. It’s short. It’s sharp. It’s straight to the point. It translates official style into plain language.

It’s not new, of course, as Karl pointed out. People have been lamenting the padding out of official language for years. In 1946 George Orwell wrote Politics and the English Language, an essay that decried the ‘contagion’ of unclear prose permeating the political language of the day. He said that ‘Political language … is designed to make lies sound truthful and murder respectable, and to give an appearance of solidity to pure wind.’ The BBC television show Yes, Prime Minister made hay with this idea, as illustrated by Karl’s example where Sir Humphrey’s phrase, ‘the precise correlation between the information you communicated and the facts insofar as they can be determined and demonstrated is such as to cause epistemological problems of sufficient magnitude to lay upon the logical and semantic resources of the English language a heavier burden than they can reasonably be expected to bear’ turns out to mean ‘You told a lie’.

After this and other fine examples of language labouring, we got down to the nitty gritty by talking about the characteristics of ‘Official Style’:

When occurring together, these characteristics of official style result in a curdled mess of meaning, quite suffocating under its own weight.

But how to administer first aid? Apply the paramedic method:

When you’ve tried this method you’ll be able to derive a scientific index of just how bad it was: the lard factor. To determine the lard factor of a given sentence, apply the paramedic method to excise some words. Divide the number of discarded words by the original number and times by 100. This tells you how much of the original sentence was unnecessary to communicate its message. Karl told us that a lard factor of 50% is typical in most official writing.

He said that over years of converting ‘Official Style’ to readable material, he has found that plain English has its own characteristics:

And with that we wrapped up our oxygen masks and put away the mannequins, having graduated from paramedic editing with a neat little checklist to back up our intuition in times of maximum complexity of emotional disturbance caused by the confluence of ever-approaching deadlines with dwindling time resources … er, stress.

Acknowledgement: this article was first published in the June edition of Offpress, the Society of Editors (Qld) monthly newsletter.